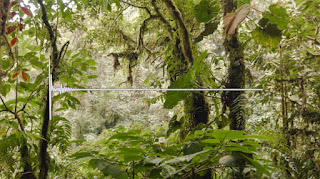 From space, parts of the Amazon rainforest that have previously been logged or burned may look fully recovered with a healthy, lush, and green canopy. They may seem to be places buzzing with activity and full of sounds. But inside the rainforest the animal life may tell a different story of damage to their environment through a quieter soundscape.

Scientists from NASA’s Goddard Space Flight Center in Greenbelt, Maryland, and the University of Maryland, College Park, investigated how the acoustics of a forest can be a cost-effective indicator of its health.

From space, parts of the Amazon rainforest that have previously been logged or burned may look lush and green, like a place buzzing with activity and full of sounds. But inside the rainforest, the animal life may tell a different story, of a harsh environment and a quieter soundscape. Credits: NASA's Goddard Space Flight Center Download this video in HD formats from NASA Goddard's Scientific Visualization Studio

Danielle Rappaport, then a doctoral student at the University of Maryland and now co-founder of the Amazon Investor Coalition, led this research beginning in 2016. She and her team combined acoustic data collected under the forest canopy with tree height measurements from aircraft flights and space-based observations of logging or fires from Landsat satellites. Landsat is a long-running partnership between NASA and the U.S. Geological Survey.

In forests that were burned multiple times, recordings of animal noises were quieter than in intact forest locations, leaving gaps in the soundscape and indicating that species that had been present before were now gone. As Rappaport ventured into these previously burned parts of the rainforest to place the recorders for the scientific measurements, she said she could feel the differences.

“I've been working with tropical forests all my professional life,” Rappaport said. “I've never quite been to a forest that was this devastated. It’s something that you can smell, you can hear, it's everywhere.” 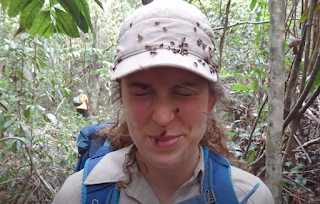 On the first day of trekking through a forest that had been burned five times throughout the study period, Rappaport’s field assistant temporarily quit due to the oppressive nature of the environment. The environment was harsher in forests that had been burned several times, Rappaport said. The forest undergrowth was thick and difficult to navigate, and insects such as sweat bees surrounded her. However, these on-the-ground differences in the animal environment aren’t observable when forests are measured from space, where the regrown canopy appears almost as green and complete as before the fires.

Instead of choosing specific times of day to target acoustic signatures of well-known species, Rappaport and her team chose to place and leave recorders in degraded forests for extended periods to gather a fuller, species-inclusive repertoire of sound. When analyzed together, these recordings revealed unique ecological fingerprints, or soundscapes. Species of frogs, insects, birds, and primates each occupy sound space in different ways – ways that enable biodiversity and ecological systems to be analyzed without scientists being physically present.

“You can think of the animal soundscape as an orchestra,” Rappaport said. “The flutes occupy a different time of day and a different frequency band than the oboes.”

Her team developed a new way to quantify forest health by analyzing soundscapes with a network theory approach. This means that by using the digital soundscape as a whole – the orchestral music – Rappaport’s team could understand the relationship between the level of impacts and the community of species – the character and quality of the instruments playing – without requiring all the species to be identified.

“It’s one more step towards understanding the sound community without needing to know which individual species are there because we’re starting to listen for them in ways that help us connect the coordinated production of sound, even if we don’t know who’s making the noise,” said Doug Morton, an Earth scientist at NASA Goddard and Rappaport’s PhD advisor.

Knowing where to place the recorders, and how to interpret the diversity of soundscapes, required additional data from lidar measurements taken between 2013 and 2016 and the past 33 years of Landsat satellite records.

“Our ability to analyze decades of history through the Landsat data record provided a strong backbone to this work,” Rappaport said.

The Landsat program, which marked its 50th anniversary in space this July, allowed the scientists to see back in time. The scientists created a timeline of Amazon forest cover for the past three decades, and used the history of forest degradation to determine where to place the recorders. With these data, the team sampled sounds from locations with varying levels of fire and logging activity.

Lidar measurements explain the diversity of soundscapes by providing a three-dimensional representation of the forest’s canopy. Airplanes flew over the forested areas, collecting tree height data that helped determine the layers of the forest between the canopy and the ground.

“That three-dimensional picture still carries a memory of some of those historic disturbances,” Morton said.

These three quantitative datasets layered together helped Rappaport and her team better understand the ecosystem structure of Amazon forests impacted by human activity.

They found that repeatedly burned forests had less biodiversity than forests that were logged once. For example, with each additional forest fire, the soundscape becomes quieter. After logging, the forest soundscape suggested a capacity to recover animal diversity.

Rappaport and her team hope this new technique will open up a new understanding of forest biodiversity that is threatened by fires and logging, and about the relationship between biodiversity and carbon stored in Amazon forests over time. Soundscapes provide a relatively cost-efficient and rapid means of estimating levels of biodiversity in complex and generally species-rich tropical environments.

“Sound data add a new dimension to our understanding of the Amazon,” Morton said. “I’m fascinated by what we still have to learn.” 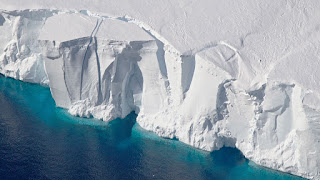 The 200-foot-tall (60-meter-tall) front of the Getz Ice Shelf in Antarctica is scored with cracks where icebergs are likely to break off, or calve, in this 2016 photo. The first estimate of Antarctic calving has found that since 1997 ice shelves have lost as much ice from calving as from melting. Credits: NASA/GSFC/OIB

New research on Antarctica, including the first map of iceberg calving, doubles the previous estimates of loss from ice shelves and details how the continent is changing.

The greatest uncertainty in forecasting global sea level rise is how Antarctica’s ice loss will accelerate as the climate warms. Two studies published Aug. 10 and led by researchers at NASA’s Jet Propulsion Laboratory in Southern California reveal unexpected new data about how the Antarctic Ice Sheet has been losing mass in recent decades.

One study, published in the journal Nature, maps how iceberg calving – the breaking off of ice from a glacier front – has changed the Antarctic coastline over the last 25 years. The researchers found that the edge of the ice sheet has been shedding icebergs faster than the ice can be replaced. This surprise finding doubles previous estimates of ice loss from Antarctic’s floating ice shelves since 1997, from 6 trillion to 12 trillion metric tons. Ice loss from calving has weakened the ice shelves and allowed Antarctic glaciers to flow more rapidly to the ocean, accelerating the rate of global sea level rise.

The other study, published in Earth System Science Data, shows in unprecedented detail how the thinning of Antarctic ice as ocean water melts it has spread from the continent’s outward edges into its interior, almost doubling in the western parts of the ice sheet over the past decade. Combined, the complementary reports give the most complete view yet of how the frozen continent is changing. 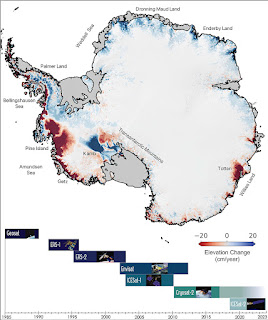 Changes in elevation of the Antarctic ice sheet from 1985 to 2021 are shown. Ice height diminishes (red) as the ice sheet melts by contact with ocean water; it rises (blue) where accumulation exceeds melting. Ice shelves are shown in gray. The missions that supplied data are listed at bottom. Credits: NASA/JPL-Caltech

“Antarctica is crumbling at its edges,” says JPL scientist Chad Greene, lead author of the calving study. “And when ice shelves dwindle and weaken, the continent’s massive glaciers tend to speed up and increase the rate of global sea level rise.”

Most Antarctic glaciers flow to the ocean, where they end in floating ice shelves up to 2 miles (3 kilometers) thick and 500 miles (800 kilometers) across. Ice shelves act like buttresses to glaciers, keeping the ice from simply sliding into the ocean. When ice shelves are stable, they have a natural cycle of calving and replenishment that keeps their size fairly constant over the long term.

But in recent decades, the warming ocean has been destabilizing Antarctica’s ice shelves by melting them from below, making them thinner and weaker. Satellite altimeters measure the thinning process by recording the changing height of the ice, but until this study, there hasn’t been a comprehensive assessment of how climate change might be affecting calving around the continent.

That’s partly because satellite imagery has been challenging to interpret. “For example,” said Greene, “you can imagine looking at a satellite image and trying to figure out the difference between a white iceberg, white ice shelf, white sea ice, and even a white cloud. That’s always been a difficult task. But we now have enough data from multiple satellite sensors to see a clear picture of how Antarctica’s coastline has evolved in recent years.”

For the new study, Greene and his co-authors synthesized satellite imagery of the continent in visible, thermal infrared (heat), and radar wavelengths since 1997. Combining these measurements with an understanding of ice flow gained from an ongoing NASA glacier-mapping project, they charted the edges of ice shelves around 30,000 linear miles (50,000 kilometers) of Antarctic coastline.

Losses from calving have outpaced natural ice-shelf growth so greatly that the researchers think it’s unlikely Antarctica can grow back to its pre-2000 extent by the end of this century. In fact, the findings suggest that greater losses can be expected: Antarctica’s largest ice shelves all appear to be headed for major calving events in the next 10 to 20 years.

In the complementary study, JPL scientists have combined almost 3 billion data points from seven spaceborne altimetry instruments to produce the longest continuous data set on the changing height of the ice sheet – an indicator of ice loss – from as early as 1985. They used radar and laser measurements of ice elevation, accurate to within centimeters, to produce the highest-resolution monthly maps of change ever made of ice loss.

The unparalleled detail in the new record reveals how long-term trends and annual weather patterns affect the ice. It even shows the rise and fall of the ice sheet as subglacial lakes regularly fill and empty miles below the surface. “Subtle changes like these, in combination with improved understanding of long-term trends from this data set, will help researchers understand the processes that influence ice loss, leading to improved future estimates of sea level rise,” said JPL’s Johan Nilsson, lead author of the study.

Synthesizing and analyzing the massive archives of measurements into a single, high-resolution data set took years of work and thousands of hours of computing time on NASA’s servers. Nilsson says it was all worth it: “Condensing the data into something more widely useful may bring us closer to the big breakthroughs we need to better understand our planet and to help prepare us for the future impacts of climate change.”