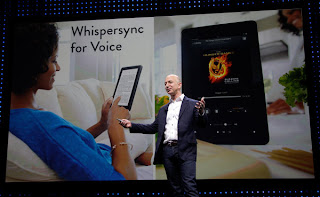 Jeff Bezos, chief of Amazon, introducing new models of the company’s Kindle e-readers in 2012.
Jeff Bezos, the founder of Amazon, loves disrupting markets. In that regard, he must be having a delightful summer. The book business, once so mired in the past it seemed part of the antiques trade, is up for grabs.

A federal judge ruled on Wednesday that Apple had illegally conspired with five of the six biggest publishers to try to raise prices in the budding e-books market.

The decision came two days after Barnes & Noble lost its chief executive and said it would not appoint another, signaling that the biggest chain of physical bookstores could be immediately broken up.


The verdict in the Apple case might have been a foregone conclusion, telegraphed by the judge herself, but it emphatically underlined how the traditional players in the book business have been upended. Only Amazon, led by Mr. Bezos, seems to have a plan. He is executing it with a skill that infuriates his competitors and rewards his stockholders.


“We’re at a moment when cultural power is passing to new gatekeepers,” said Joe Esposito, a publishing consultant. “Heaven forbid that we should have the government telling our entrepreneurs what to do, but there is a social policy issue here. We don’t want the companies to become a black hole that absorbs all light except their own.”


The Apple case, which was brought by the Justice Department, will have little immediate impact on the selling of books. The publishers settled long ago, protesting they had done nothing wrong but saying they could not afford to fight the government. But it might be a long time before they try to take charge of their fate again in such a bold fashion. Drawing the attention of the government once was bad enough; twice could be a disaster.


“The Department of Justice has unwittingly caused further consolidation in the industry at a time when consolidation is not necessarily a good thing,” said Mark Coker, the chief executive of Smashwords, an e-book distributor. “If you want a vibrant ecosystem of multiple publishers, multiple publishing methods and multiple successful retailers in 5, 20 or 50 years, we took a step backwards this week.”


Some in publishing suspected that Amazon had prompted the government to file its suit. The retailer has denied it, but it still emerged the big winner. While Apple will be punished — damages are yet to be decided — and the publishers were chastened, Amazon is left free to exert its dominance over e-books — even as it gains market share with physical books. The retailer declined to comment on Wednesday.


“Amazon is not in most of the headlines, but all of the big events in the book world are about Amazon,” said Paul Aiken, executive director of the Authors Guild. “If the publishers colluded, it was to blunt Amazon’s dominance. Barnes & Noble’s troubles may stem from a misstep with its Nook tablets, just as Borders’ bankruptcy might have been hastened by management mistakes, but its precarious position is that of any rent-paying retailer facing a deep-pocketed virtual competitor.”


Last week, Penguin and Random House officially merged, creating a publishing behemoth that might be able to determine its future rather than suffer the fate of Barnes & Noble, a once-swaggering entity that now seems adrift. Random House was not a target of the Justice Department; Penguin was.


Penguin and Random House were innovators who made paperbacks into a disruptive force in the 1940s and ’50s. They were the Amazons of their era, making the traditional book business deeply uneasy. No less an authority than George Orwell thought paperbacks were of so much better value than hardbacks that they spelled the ruination of publishing and bookselling. “The cheaper books become,” he wrote, “the less money is spent on books.”


Orwell was wrong, but the same arguments are being made against Amazon and e-books today. Amazon executives are not much for public debate, but they argue that all this disruption will ultimately give more money to more authors and make more books more widely available to more people at cheaper prices, and who could argue with any of that?


This was not a prospect that many on Wednesday were putting much faith in.


Amazon, its detractors argue, is not a nonprofit or public trust but a hard-nosed company whose investors hope will make lots of money someday soon. It shares closed Wednesday at $292.33, a record.


But the more pressing concern for the industry is the fate of Barnes & Noble. When Borders collapsed two years ago, analysts said there was an unexpected consequence to the loss of 400 stores: the e-book growth rate began to taper off, as readers could no longer examine new titles before ordering them from Amazon.


E-books, in other words, were not a magical technology that could shed all the existing infrastructure of publishing. They needed the existing ecosystem.


“If all of those corporate outlets vanish, there is suddenly a hell of a lot less space devoted to showcasing a large number of titles,” said J. B. Dickey, owner of the Seattle Mystery Bookshop. “We’ll probably see a continuing shrinking in print runs, maybe fewer titles published, fewer authors published and the New York houses retreating into the known best-sellers. Which means more novice and midlist authors scrambling to find a way to stay in print and more authors self-publishing their print books — or more likely releasing their works as e-files.”


All of that sounds dire. Perhaps the only consolation for those who fear the power of Amazon is the knowledge that all companies eventually peak, no matter how unlikely that seems when they are in the ascendance.


Mr. Esposito, the consultant, remembered that 30 years ago there was a book called “The Media Monopoly,” which worried about the excessive power of the Gannett chain of newspapers as well as the three major television networks.

A version of this article appeared in print on July 11, 2013, on page A1 of the New York edition with the headline: E-Book Ruling Gives Amazon An Advantage.