NASTRAGULL: Dawn Sets In Hell (volume 3) will be available December 3rd, 2015 on kindle and paperback.
PS this is not the book cover 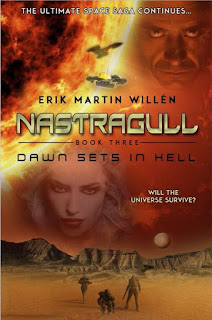 
Updates on my next book in the NASTRAGULL series will be posted here.
Thank you.
Erik Martin Willén

An epic space adventure that holds danger at every turn... The human cadets on the interstellar transport, Bright Star, are heading home after eight long years of military training...but things don't go according to plan. After a bloody battle with a group of space pirates, the Bright Star and its survivors are taken prisoner with the intent of selling them into slavery...or worse. Cadet Alec Horn, along with the captain of the Bright Star escape, taking an emperor's ransom in loot with them. Together they set out on a dangerous adventure to rescue their friends and comrades. But can they succeed without bringing forth a war that will bring death and destruction across the universe?

The space adventure for a new generation continues... After escaping from pirates with an emperor's ransom in loot, young Alec Horn takes refuge in a roving collective of space stations and massive starships called New Frontier. A freewheeling, neutral territory, New Frontier is the ideal place for Alec to regroup and outfit an expedition to rescue his captured colleagues. Alec, the son of the noble house of Hornet, military leaders of the Nastasturus Federation, has managed to rescue Alexa, the pirate girl he's fallen for, from the clutches of the notorious Zoris af Sun—an artist of questionable cannibalistic tastes. But Alec has also made immensely powerful enemies. Enemies who will spare no expense to destroy him and recover what they consider rightfully theirs…leaving few survivors and forever altering Alec's Destiny.
Posted by Erik Martin Willen at 12/24/2013 10:48:00 AM