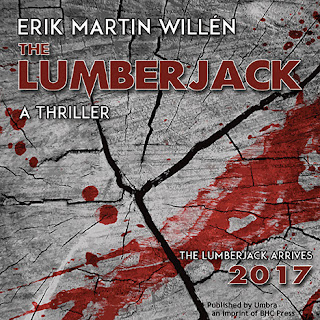 THE LUMBERJACK
by
Erik Martin Willén
Two great stories that came to my mind when working on Lumberjack are;  The Silence of the Lambs (Hannibal Lecter #2) by Thomas Harris meets First Blood (Rambo: First Blood #1) by David Morrell. 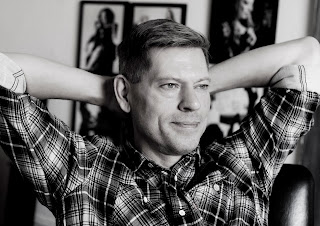 The truck came to a stop at the head of the hill, on the landing zone. Paul Harris parked it near the cable yarder, ignoring the safety regulations; after all, this was his site. He was the foreman, the man in charge. He looked over the situation, and saw that the spider web, with its guidelines made of thick steel cables, was intact. They should have removed the 90-foot-long steel tower, but the storm had hit them too fast. He was happy to see that nothing major had been damaged yet.


He got out of the truck and walked to the edge of the road to look down into the valley. The morning fog was thick, impenetrable to his eyes more than 20 feet out; all he could see were the two wires attached to the yarder coming up from the fog in two dark lines. It looked unnatural, wrong, somehow. He cursed when he realized that his crew had forgotten to secure the skidder at the top—that the darn thing was still at the bottom of the hill. That's when he really noticed the faint hum of the diesel engine; he'd gotten so used to it that he hadn't paid any attention to it when he arrived. He looked around, but he couldn't see any other trucks parked in the parking area. He cursed; if the morons on his crew had left the engine for the cable yarder on all night, there would be hell to pay—and apparently the idiots had.


Sighing, Paul got into the cab of the cable yarder and turned it on. He prayed that the choker setters had fixed the wires and not left them attached to a log. If they had, then he would have to climb down and get them lose. All he wanted to do was to secure the stupid thing and get back home before the storm returned. According to the weatherman, they were in the eye of the storm, and it would return in its fury within the hour. He had to be quick.


The old diesel engine thundered away, tugging against some sort of resistance; the wires seemed to be stuck. Paul kept his calm and eased on the throttle, and again he forced the engine to max, pulling at the thick wires. Finally it gave way, and Paul let out a sigh as he went for the cigarette package in his left breast pocket. He stuck a Marlboro between his lips and then he looked for his lighter. He found it in his right jeans pocket. "Darn it to hell," he cursed as he dropped the lighter on the floor. He bent to pick it up, and was just about to light his first cigarette of the day when his mouth went wide; for a second, the cigarette hung from his bottom lip before it fell to the deck of the cab, and soon the lighter followed.


A sudden fear struck Paul like an electric shock, and his skin tingled into goose bumps. Emerging slowly through the thick dense fog came the skidder carriage, and hanging upside down from one of the wires was what looked like a dead body.
Posted by Erik Martin Willen at 12/09/2016 09:50:00 AM