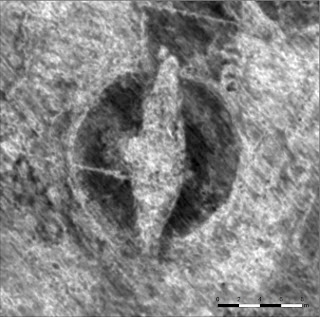 Archaeologists in Norway using ground-penetrating radar have detected one of the largest Viking ship graves ever found.


Experts say intact Viking ship graves of this size are vanishingly rare. “I think we could talk about a hundred-year find,” says archaeologist Jan Bill, curator of Viking ships at the Museum of Cultural History in Oslo. “It’s quite spectacular from an archaeology point of view.”
The site where the ship grave was found is well-known. A burial mound 30 feet tall looms over the site, serving as a local landmark visible from the highway just north of the Swedish border. But archaeologists thought any archaeological remains in the nearby fields must have been destroyed by farmers’ plows in the late 19th century.
Then, this spring, officials from the surrounding county of Ostfold asked experts from the Norwegian Institute for Cultural Research to survey the fields using a large ground-penetrating radar array. They were able to scan the soil underneath almost 10 acres of farmland around the mound.
Underneath, they found evidence of ten large graves and traces of a ship’s hull, hidden just 20 inches beneath the surface. Knut Paasche, head of the archaeology department at the Norwegian Institute for Cultural Research and director of the recent work at the site, estimates the ship was at least 65 feet long. It appears to be well-preserved, with clear outlines of the keel and the first few strakes, or lines of planking, visible in the radar scans.
The ship would have been dragged onshore from the nearby Oslo fjord. At some point during the Viking Age, it was the final resting place of someone powerful. “Ships like this functioned as a coffin,” says Paasche. “There was one king or queen or local chieftain on board.”
Source for more information:  By Andrew PUBLISHED October 15, 2018
Photograph courtesy NIKU
Curryhttps://www.nationalgeographic.com/culture-exploration/2018/10/viking-ship-discovered-norway-archaeology/
https://www.nationalgeographic.com/culture-exploration/2018/10/viking-ship-discovered-norway-archaeology/
Posted by Erik Martin Willen at 10/16/2018 05:13:00 PM