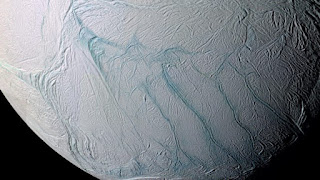 Saturn’s gravity exerts tidal forces on Enceladus, which cause heating and cooling of the tiny world. Those forces are strongest at the poles. As liquid water solidifies into ice under the outer ice shell, it expands in volume, putting pressure on the ice until it cracks.


Enceladus’ surface temperature is about negative 200 degrees Celsius, so if a crack formed in the ice, you would expect it to freeze shut pretty quickly. Yet the south polar fissures remain open, and in fact reach all the way to the liquid ocean below.


That’s because liquid water within the fissure is sloshed around by tidal forces produced by Saturn’s gravity, releasing energy as heat, Rudolph said. That stops the crack from freezing shut.


The release of pressure from the fissures stops new cracks from forming elsewhere on the moon, such as at the north pole. But at the same time, water vented from the crack falls back as ice, building up the edges of the fissure and weighing it down a bit. That causes the ice sheet to flex, the researchers calculate, just enough to set off a parallel crack about 20 miles away.


“Our model explains the regular spacing of the cracks,” Rudolph said.


The work was based on data collected by the NASA/ESA Cassini mission to Saturn. Funding was also provided by NASA and the National Science Foundation.