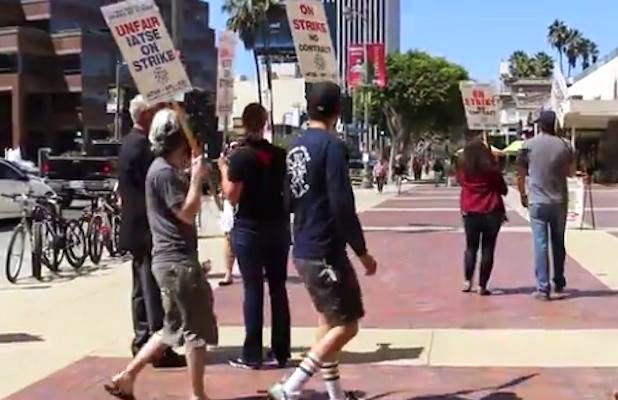 TheWrap
Insiders tell TheWrap that Ryan Seacrest Productions has yet to contact the union since their demand for negotiations on Tuesday
The striking “Shahs of Sunset” post-production crew will soon see their numbers swell.
Individuals with knowledge of the situation told TheWrap that actors’ union SAG-AFTRA issued a call Friday afternoon for their members to join IATSE and allies on the picket line.
Ryan Seacrest Productions, which produces “Shahs” for Bravo, has yet to respond to the union's letter on Tuesday in which it demanded negotiations.
Representatives for RSP and SAG-AFTRA didn't immediately respond to TheWrap's requests for comment.
Since shutting down production on Wednesday and picketing in front of RSP on Thursday, the striking workers have forced Bravo to push the premiere for “Shahs” to a later date. It had previously set Oct. 13 debut date for the show on Tuesday — before the strike occurred.
According to the Motion Picture Editors Guild, “Shahs” employees have overwhelmingly signed cards authorizing IATSE to negotiate on their behalf.
On Tuesday, the union sent Berne Productions, Inc., a Ryan Seacrest Productions subsidiary and the crew's employer, a letter requesting an immediate start to contract talks. After having received no response from the employer, the crew walked off the job on Wednesday morning.
“What we're striking for is health coverage and pension payments,” Motion Picture Editors Guild president, Alan Heim, A.C.E., told TheWrap. “Reality television is getting to be more and more a field that many of our members work in and we have to fight back against non-union shops.”
As more nonfiction and entertainment employees search out union representation, there have been a series of high-profile work stoppages by production and post-production reality television crews in the IATSE's ongoing campaign to unionize the genre.
Less than a month ago, a similar strike succeeded in winning a contract for employees of CBS's “Survivor.”
Other members of nonfiction and alternative programming have also sought union organization, such as the writers on E!'s “Fashion Police.”
THE WRAP TV | By Jethro Nededog on September 12, 2014 @ 9:58 pm
Posted by Erik Martin Willen at 9/13/2014 08:11:00 AM