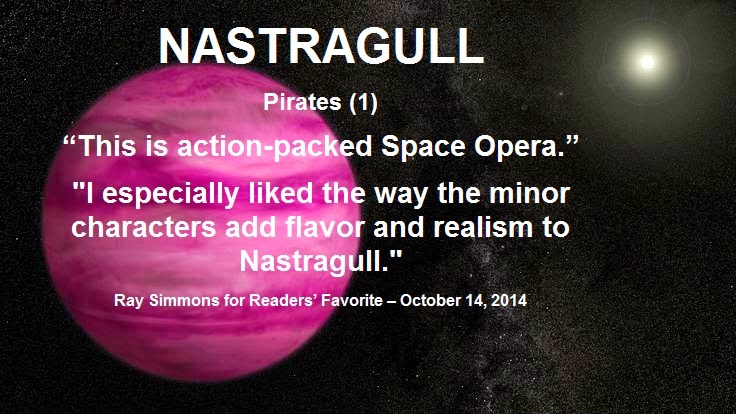 NASTRAGULL: Pirates (volume 1)
Review by Ray Simmons for Readers’ Favorite – 4 Stars
Nastragull (Book 1) is Space Opera with space being a metaphor for the vastness that the oceans represented before technology made the distances seem smaller. This is actually a traditional approach to Space and Science Fiction and Erik Martin Willen does it as well as most. The story starts with a space battle as a cruiser is captured. The heroine is a space pirate who was captured as a young girl. In the tradition of just about any adventure novel you can think of, Alexa is stunningly beautiful as well as being a very capable pirate. When she sets eyes on Alec, a cadet captured in the initial battle, a series of events begin that have consequences for the entire galaxy. Alec and Alexa are special with an entertaining array of characters, both friends and enemies, in tow and thus we begin to learn how special they are.

Erik Martin Willen gives us a hint of the royal nature of Alec and Alexa in the beginning of Nastragull and slowly develops this theme throughout the novel. The situations and predicaments our heroes find themselves in are realistic and gritty, but their innate goodness and nobility see them through. There are some awful situations and villains to overcome but Alec and Alexa are up to the task. The writing is straight to the point and the dialogue is exactly what you would expect from characters living in such arduous times. I especially liked the way the minor characters add flavor and realism to Nastragull.
Posted by Erik Martin Willen at 10/15/2014 07:07:00 PM