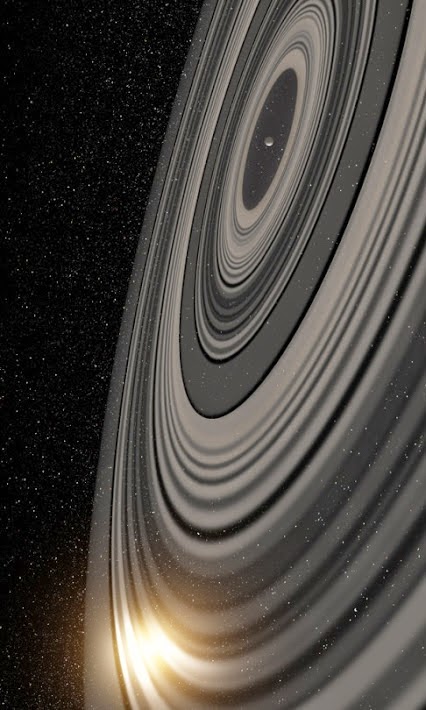 The ring system – the first of its kind to be found outside our solar system – was discovered in 2012 by a team led by Rochester’s Eric Mamajek.
A new analysis of the data, led by Leiden’s Matthew Kenworthy, shows that the ring system consists of over 30 rings, each of them tens of millions of kilometers in diameter.
Furthermore, they found gaps in the rings, which indicate that satellites (“exomoons”) may have formed. The result has been accepted for publication in the Astrophysical Journal.

“The details that we see in the light curve are incredible. The eclipse lasted for several weeks, but you see rapid changes on time scales of tens of minutes as a result of fine structures in the rings,” _ says Kenworthy. _“The star is much too far away to observe the rings directly, but we could make a detailed model based on the rapid brightness variations in the star light passing through the ring system. If we could replace Saturn’s rings with the rings around J1407b, they would be easily visible at night and be many times larger than the full moon.”