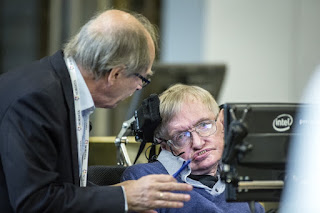 Hawking with Nobel laureate Gerard t'Hooft in Stockholm. (KTH)
On Tuesday, famed physicist Stephen Hawking presented new theories on black holes to a crowd of esteemed scientists and members of the media at KTH Royal Institute of Technology in Stockholm.
Hawking focused on something called the information paradox, which continues to puzzle scientists who study black holes. In a nutshell, the paradox involves the fact that information about the star that formed a black hole seems to be lost inside it, presumably disappearing when the black hole inevitably disappears. These things cannot be lost, according to the way we think the universe works, and physicists generally believe that they aren't really lost. But where does the information go when the black hole that's absorbed it goes kaput?
[Stephen Hawking announces $100 million hunt for alien life]
It's brainy stuff, but without an explanation for the apparent paradox, some of the most basic laws we think exist in the universe are at stake. At a public lecture in Stockholm on Monday, Hawking implied that our concept of time itself could fall apart if black holes proved to be exempt from such laws.
see video below
On Tuesday, he explained his new theory: "I propose that the information is stored not in the interior of the black hole as one might expect, but in its boundary, the event horizon," Hawking said. The event horizon is the sort of shell around a black hole, past which all matter will be drawn into the dense object's powerful embrace.
According to Hawking's idea, the particles that enter a black hole leave traces of their information on the event horizon. When particles come back out — in a phenomenon called Hawking Radiation — they carry some of that information back out, preserving it. Technically, anyway.
"The information is stored in a super translation of the horizon that the ingoing particles [from the source star] cause," he explained, for those of you who like a little more physics lingo. "The information about ingoing particles is returned, but in a chaotic and useless form. For all practical purposes the info is lost."
At Monday's public lecture, he explained this jumbled return of information was like burning an encyclopedia: You wouldn't technically lose any information if you kept all of the ashes in one place, but you'd have a hard time looking up the capital of Minnesota.
The translations that occur form a sort of hologram of the original particles, Hawking said — a hologram in the sense that 3-D information is recorded on a 2-D surface. When radiation leaves the black hole, it carries some of that information preserved on the event horizon with it.


Nobel laureate Gerard t'Hooft, who was present for the discussion, has been thinking about information loss in a similar way, and he cited several papers he has published on the subject. It will take more discussion — and much comparing of math equations — to establish what's new about Hawking's theories in relation to t'Hooft's, and whether Hawking has overcome some of the issues associated with earlier iterations of the idea.


It's worth noting that Hawking — who drew a large crowd of Swedish journalists on the morning of his announcement — is not alone in presenting big new ideas on black holes this week. Hawking's presentation was part of a week-long conference on black holes organized by University of North Carolina at Chapel Hill physicist Laura Mersini-Houghton and The Nordic Institute for Theoretical Physics (Nordita). Hawking and his colleagues — some of the greatest minds in theoretical physics — are hoping to answer some of science's most burning questions about how black holes work. You can read more about the conference here.


The Washington Post By Rachel Feltman August 25, 2015
Source: http://www.washingtonpost.com/news/speaking-of-science/wp/2015/08/25/stephen-hawking-believes-hes-solved-a-huge-mystery-about-black-holes/
At a conference in Stockholm, famed physicist Stephen Hawking explains how he thinks information is stored in black holes - a concept that he implies could change our concept of time. (KTH Royal Institute of Technology)