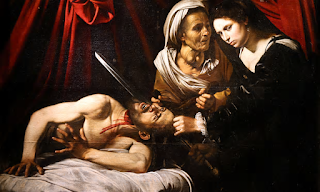 The painting Judith Beheading Holofernes at its presentation in Paris. It may have been painted by Caravaggio (1571-1610) and could be worth €120m. Photograph: Charles Platiau/Reuters
It could turn out to be an Italian Renaissance masterpiece by one of history’s greatest painters; yet the mysterious 400-year-old canvas was only found by accident when the owners of a house near Toulouse went to fix a leak in the ceiling.
The large, remarkably well-preserved canvas of the beheading of the general Holofernes by Judith, from the apocryphal Book of Judith, was painted between 1600 and 1610, specialists estimate. And many experts believe it could be a work by the Milan-born master, Caravaggio.
Labelled the Caravaggio in the attic, France has put an export ban on the painting to stop it leaving the country while investigations are carried out.
Speaking to reporters, the painting expert Eric Turquin said it could be worth as much as €120m (£96m), describing the work as having “the light, the energy, typical of Caravaggio, without mistakes, done with a sure hand and a pictorial style that makes it authentic”.
While other specialists have questioned its provenance, Turquin got the backing of a top Caravaggio expert, Nicola Spinoza, former director of the Naples museum. In an expert assessment seen by Agence France-Presse, Spinoza wrote: “One has to recognise the canvas in question as a true original of the Lombard master, almost certainly identifiable, even if we do not have any tangible or irrefutable proof.”
Turquin said there will never be a consensus about the name of the artist. Two Caravaggio experts he consulted attributed the painting to Louis Finson, a Flemish painter and art dealer who was familiar with Caravaggio. They say Finson possessed a number of works by the Italian master and made copies of his pictures.
“But the third expert I met told me that it was not only a Caravaggio, but also a masterpiece,” Turquin said. “Judith Beheading Holofernes must be considered the most important painting, by far, to have emerged in the last 20 years by one of the great masters.”
But the French art newspaper Le Quotidien de l’Art quoted another expert on the artist, Mina Gregori, as saying that it was not an original, although she recognised the “undeniable quality of the work”.
In a statement, the French culture ministry has said the painting should stay on French soil “as a very important Caravaggian marker, whose history and attribution are still to be fully investigated”.
The export ban means it cannot leave the country for 30 months while it is studied, and to allow French national museums enough time for its potential acquisition. The Louvre Museum in Paris has already spent three weeks studying it.
The painting, which measures 144cm x 175cm (56in x 69in) was found in April 2014, in the rafters of a house on the outskirts of Toulouse.
The family telephoned a local auctioneer, Marc Labarde, a close partner to Turquin. After using cotton wool and water to clean it, he recognised a 17th-century painting from the Caravaggio school.
Turquin kept the picture away from the public’s eyes for two years, cleaning it and submitting it to a deep examination, which included infrared reflectography and X-rays.
The Guardian by Angelique Chrisafis and agencies in Paris, Tuesday 12 April 2016 17.54 BST
Source: http://www.theguardian.com/artanddesign/2016/apr/12/lost-caravaggio-causes-rift-in-art-world
Posted by Erik Martin Willen at 4/16/2016 12:43:00 PM