Where 17,000 Ocean Research Buoys Ended Up 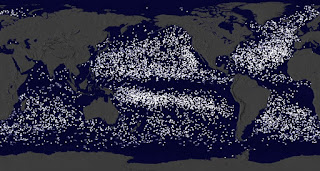 Free-floating buoys, released by the National Oceanic and Atmospheric Administration, track temperature, saltiness and other ocean properties. Experts at NASA’s Scientific Visualization Studio combined the movements of more than 17,000 buoys to illustrate the motions of the oceans.

The buoys start off scattered across the oceans, with some in neat lines that follow the paths of buoy-deploying research vessels. From this chaos, the buoys begin to migrate into clusters. Over time, most drop off the grid and disappear, but some buoys eventually end up in one of the ocean garbage patches.

The garbage patches aren’t floating landfills of intact soda bottles and yogurt cups. The gyres are instead speckled with tiny plastic bits smaller than grains of rice, as many as 100,000 per square kilometer. All that plastic can end up in fish and serves as a foundation for microbe colonies.