The Dangers When Financiers Think They Can Produce Movies, Too 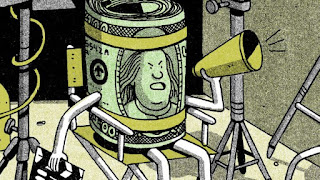 Illustration by: Wren McDonald
From Ryan Kavanaugh's failed Relativity to David Ellison's 'Terminator' trouble, the shift from film financier to creative producer often is rocky. Says one veteran: "They all think movies grow on trees and they can plant the same trees the studios do."
Hollywood has an unslakable thirst for money. Every major studio except Disney now counts on outside investors to finance film productions. And while top executives might not put it this way, they generally hope that those who back their movies will keep their wallets open and their mouths shut.
But as recent events illustrate, these ambitious investors often don't comply, especially if they meet with early success. They have an imperative, if they want to build their companies' value, to create their own intellectual property. But having been brought in on a few hits developed by studios, they sometimes begin to believe that the game may not be so difficult, or if it is, they know how to play it. And often they learn that the movie business is hard.
Consider David Ellison, who is said to be a billionaire thanks to his father, Larry Ellison of Oracle. Five years ago, Ellison's Skydance Productions began to invest in Paramount movies. He did well with Mission: Impossible — Ghost Protocol and the Coen brothers' True Grit, staying below the radar and taking advice from mentors including David Geffen, attorney Skip Brittenham and the late Tom Sherak.
But this summer, Ellison, 32, went very public to promote the first film that he produced himself, Terminator: Genisys. He sat for a profile in GQ and gave an interview to The New York Times in which he outlined plans for a Terminator "universe." Declaring that he wanted his company to be another Marvel, he said he had two sequels and a television show in the works. Paramount CEO Brad Grey told the Times, "On a creative level, we certainly have come to rely on David," while Jerry Bruckheimer, at work with Ellison on a Top Gun reboot, added that Ellison had "really good story ideas."
By the time the Times article appeared, Terminator: Genisys had opened to a soft $27 million domestic, and the article suggested that the film illustrated a hard truth: "Paying for movies is one thing. Steering them crea­tively is another." The film did well overseas, especially in China, where it grossed $112 million. But the $150 million-plus movie still will lose money, and sources say the notion of a Terminator universe is on hold indefinitely.
"I think [Ellison] learned a real lesson," says an insider with knowledge of the situation. "I don't think he was listening to anybody." But a source with ties to Ellison disputes that and says his producing skills were on display when he played a key role in salvaging World War Z and producing Mission: Impossible — Rogue Nation. "He is the quickest learner I have seen in the business," this person says. "He acknowledges his mistakes, as opposed to other people who don't."
Another investor who has found mixed results making original films is Thomas Tull of Legendary Pictures, who in 2005 entered into a fruitful relationship with Warner Bros. He provided the studio with needed backing for Christopher Nolan's Dark Knight films and other hits including The Hangover.
His belief in his own skill was reinforced when he helped develop a 300 sequel and Clash of the Titans and financed the 2013 Jackie Robinson biopic 42, a smaller-budgeted project that grossed $95 million. Eventually, Tull ponied up 75 percent of Guillermo del Toro's Pacific Rim, which performed solidly overseas but still lost money, according to sources; a planned sequel was shelved.
Legendary did better with Godzilla, which grossed $529.1 million worldwide. But Warners executives began to feel that Tull was taking too much credit for its hits while he began to grumble that he was being taken for granted. So Tull moved to Universal, where he put two expensive films through the studio's pipeline: the disastrous Blackhat and the disappointing Seventh Son. Meanwhile, Tull picked brilliantly from among Universal's films, investing in Jurassic World and Straight Outta Compton. As THR reported, the studio is concerned about Tull's upcoming films in which it has invested: Warcraft and The Great Wall. And Universal recently allowed Tull to take his Kong: Skull Island project to Warners, where it will be part of a three-picture deal linking the giant ape with Godzilla.
Of course, the worst-case scenario involves Ryan Kavanaugh, whose Relativity Media is in bankruptcy. In 2006, Kavanaugh helped finance a slate of Sony and Universal films. In 2010, he went out on his own and for the first time had to rely on what he said was a reliable algorithm for picking hits. Whether Kavanaugh was fooling himself or others with his model is a subject of much speculation.
One Hollywood veteran says the problem for many outsiders is that they have no experience working as executives at studios. "What happens is they all think movies grow on trees and they can plant the same trees that the studios do," he says. "What they don't understand is how much the studios write off to get one project. The ratio is bad and they think they can beat it." He also posits that the outside investors are more susceptible to being "caught in the trap" of making films because they want to be in business with a well-known director or star.
Veteran producer Joe Roth says that financiers generally have too much ego and not enough skill to anticipate the zeitgeist. "They always come up with what they think is the right thing and it's the wrong thing," he says. "It's yesterday's news. They're behind the audience."
The Hollywood Reporter  by Kim Masters 10/1/2015 5:00am PDT


This story first appeared in the Oct. 9 issue of The Hollywood Reporter magazine. To receive the magazine, click here to subscribe.
Posted by Erik Martin Willen at 10/01/2015 06:22:00 PM