Chris G. Wright - This Indie Author’s Debut Sci-Fi Novel Is The Innovation The Genre Needs - And He’s Only 28! 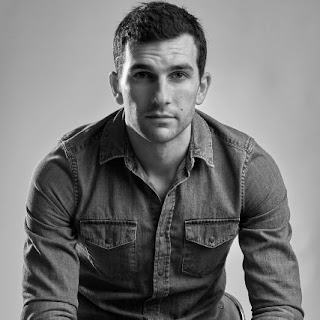 
“Finally, a Sci-Fi Book that Brings a Much-Needed Darker Shade of Gravity and a Breath of Fresh Air to the Genre. Just Out of the Oven and Ready to Take On the Big Titles.”


Only 28 years old, but Chris G. Wright is ready to make his presence known in the Science Fiction landscape with his debut novel THE ALLIANCE, Volume 1 of 6 of THE EVOX CHRONICLES. Released as an e-book (November 2016), and now in paperback (February 2017), it promises a series of epic proportions. He is one of few authors who has broken away from the mainstream of Young Adult Fiction and the monotonous Space-Battle-Alien-Blood-&-Guts books that have afflicted the genre.


Chris G. Wright, of Greek/Irish descent, was born in Greece, April 19, 1988. According to his Goodreads profile, he makes it known that he wanted to become an Air Force pilot, though his journey through life, with a few twists and turns, has finally led him to become a self-published writer. Influenced by authors like R.A. Salvatore, who he dedicates The Alliance to, Peter F. Hamilton and Joe Haldeman, he hits the book market with a powerful intake of his vision a dystopian Earth.


The Alliance lays the groundwork for a 6-volume science fiction series that takes Humanity on a thrilling journey from dystopia to utopia, from an Earth occupied by other species of the Milky Way to interstellar travel and space colonization, to galactic warfare and head-to-head encounters with the cosmos’s greatest threats.


Grady Harp, author of War Songs, says: “Splendid is the first word that comes to mind after closing the last page of this hefty book. Chris G. Wright clearly has a solid career in following his dream. Well painted stagecraft, credible characters, and a pace that leaves the reader breathless. Highly Recommended.”


Blogger Les Simkin, in his review of The Alliance, says: “A story about human origins and destiny, painted upon a vast and wonderful canvas. This is a big story, the first of a six-volume series that looks like it’s going to be quite an epic. The author has combined many tried and true tropes of the genre creating a blend of space opera and sci-fi action adventure, with melodramatic conflict between opponents who have advanced abilities, weapons, and other technologies. There are battles and skirmishes in quantity and lots of explosions. Quite dynamic in theme, it starts as a dystopian drama, moving into human-alien first contact and growing into the large scale space opera that it really is.”


Les Simkin, who has made himself known on Goodreads as an avid reader and reviewer of Science Fiction, gives The Alliance 4.5/5 stars, claiming: “In summary, this is an excellent addition to the massive array of indie science fiction books, one that thoroughly deserves every bit of praise it gets. I’ve been left breathless by the sheer scale of the story. I give it a solid 4.5 stars, only losing that last little half for slightly jumbled arrangement. I’ll be watching this series and this author, he’s a refreshing and exciting prospect.”


2. The Alliance, The Evox Chronicles, Volume 1 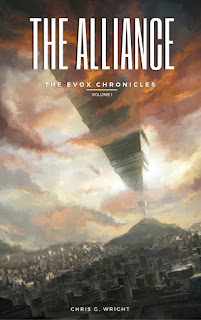 
Description:
Earth has been invaded and mankind has been pushed towards extinction by the ambitious conquest of an alien civilization, the Rabast, led by the oppressor Vadist.


Help comes with the arrival of an ambiguous ally from the Pleiades star cluster. The last colony of Pleodians have formed an elaborate plan to save Earth, but the Alliance comes at a price… the Humans will have to share their planet. Nearing extinction, do they have a choice?


The Alliance must rely on two Humans who possess alien artifacts of seemingly infinite energy: Ethan Alexander Colt is a resistance fighter expected to make the ultimate sacrifice; the other is the tormented Captain Donovan Ford, who must conquer his ghosts and embrace his destiny as a soldier.


For the plan to work, it requires a collection of War Engines, the Conduits, ancient combat suits used by the infamous Scientists. But Humans were designed with flaws, and Ethan and Donovan are no different. Will they see beyond their own aspirations and fight for the greater good? Or will they threaten the endurance of the Alliance and stability of the cosmos?


I think it’s a sci-fi masterpiece that gets it right, balancing a post-apocalyptic war-ravaged Earth and a space opera/adventure, and ties all the events together with the drama reminiscent of Interstellar (2014), the gravity of Oblivion (2013) and the magnitude of Independence Day (1996). There are vivid descriptions of vistas of a post-apocalyptic Earth painted with as much verve like so many fantasy stories. The characters are colourful, and they come with depth and entertaining relationships, no matter which part of the galaxy they’re from. The book focuses subtly on humanity, racism and xenophobia, on evolution and religion, on a realistic scenario of how we humans would deal with an alien invasion, as well as an alien helping hand.


And I mustn’t forget the mystery. The book begins with:
” The entity had no name. It had no flesh, no bones, no beating heart. Nothing about it was organic. It was energy, pure energy brought together as a semi-transparent, lanky humanoid form. Its title was ‘Director,’ its universal purpose to stimulate the amusement of its superiors.
‘Have you finished your project?’ said the Aide as it stepped into the void. The supernova in the starry background highlighted the Director’s lithe silhouette with a prism effect, making it easy to spot within its vibrant domain. ‘The Spectators are eager to see what you are preparing.’
‘They will have to wait.’ The Director’s tone was abrupt, the outline of its transparent body flashing a bright purple with agitation. It kept its unseen eyes on the projection of war weaved by a myriad of beams, but it sensed the Aide approach with caution.
‘They simply cannot get enough of your work. You cannot blame them for being impatient.’ The Aide drifted across and stepped next to its boss.
‘I can blame them for not understanding the complications of the algorithm, the passing of time as perceived by the mortals … and the effect of consequence on the material world.’
The Aide watched the ensuing warfare between two civilisations with mounting intrigue. It could almost guess what sort of material the Director was preparing. ‘Are you incorporating the Evox Cores into your theme?’
‘So far, they have been a success. Their absence from my new project would be unwise.’ The Director waved its lanky hand across the projection, causing it to shift to a different region of the planet during the same time instance. ‘Have you found a protagonist as I requested?’
The Aide, much smaller in size from its superior, expressed its contentment with a glow equal to that of a star. ‘Yes. A most interesting find.’
‘Show me.’
Although the Director’s voice was stern, the Aide sensed its curiosity. It took control of the projection and focused on a particular scene. It glided out of the way and waited for the customary modest feedback. The Director’s interest piqued when the protagonist pushed through a sea of human refugees, a determined face swimming in the terror and utter disarray of two worlds at war.
‘An interesting choice,’ said the Director, already scheming, calculating.
Not surprised by the expected modest feedback, the Aide said, ‘I believe he is perfect for this project.’
‘And have you run the algorithm?’
‘The probabilities, should you choose him, are three times the amount of any other human. He will provide a variety of designs to choose from. Keep the one you see fit,’ said the Aide.
The Director searched through the billions of scenarios in the span of a millisecond. A brief orange blush in its translucent head expressed its approval.
‘Have you found a probability?’ asked the Aide.
‘I have,’ said the Director. ‘The Spectators will be most pleased.’ “


I’ve been looking for a good Sci-Fi for a while now, and I was surprised that it came in the debut novel of a new and self-published author. In a blog post, Chris G. Wright claims that even a full-time job and responsibilities can’t even stand in the way of his passion for the written word, and that truly shows in his delivery of a truly innovative novel. Chris G. Wright is definitely the prodigy of 21st century Science Fiction.