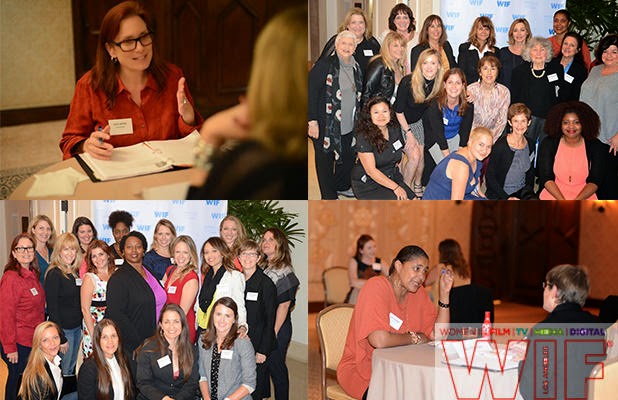 Accomplished women agents, managers, entertainment attorneys and producers downloaded newbies on how to climb the Hollywood ladder at Women In Film's “Speed Mentoring”
“Never equate kindness with weakness.” – Iris Grossman, Agent, Paradigm
“Do your job as though you're not scared to be fired.” – Susan Cartsonis, Producer, Storefront Pictures
”Better to beg for forgiveness than ask for permission” – Ghen Laraya Long, VP Mandalay Digital Group
Those were just three of the hundreds of pieces of advice handed out at Women In Film's “Speed Mentoring” program at the Montage Thursday night.
What LinkedIn is to Tinder, “Speed Mentoring” is to “Speed Dating.” Twenty handpicked mentees starting out their industry careers got the equivalent of 20 general meetings, all in a night.
“I had no mentors,” Marion Rosenberg, WIF member and producer of “The Deer Hutner”, told TheWrap.
“I came to this country over 50 years ago, and there was not one woman I could look to and say ‘I want her job. I want to do what she's doing. I want to be that woman.’ Not one.” 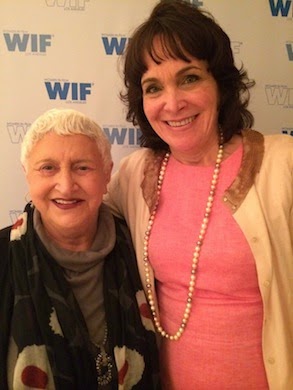 Marion Rosenberg and Chevonne O'Shaughnessey at the Montage Thursday night. (Carina Tautu)
Chevonne O'Shaughnessey, who founded the program, points to Red Silverstein, former president of MGM International who started his own career in the 1920's.
“I would call him up. He would tell me his stories of what it was like when he ran MGM and then he would tell me who to call,” O'Shaughnessey said.
“Using his name to get to that person was a lot easier than me saying, ‘This is Chevonne O'Shaughnessey. His children and I are still good friends.”
Only 20 women from WIF's mentee program got the chance to speed date with the likes of AFI Associate Dean Betsy Pollock, actress Sharon Lawrence, Hollace Davids (VP at Universal Pictures), and the hilarious Nell Scovell (a must twitter follow @NellSco) whose recent comparison between the memoirs of Alaskan street fighter Bristol Palin and Nobel Peace Prize winner Malala Yousafzi went viral.
Besides not hitting a party host in the face “5 to 6 times” and ducking out in a white stretch Hummer limo, here's nine more pieces of advice doled out at WIF's event Thursday night.
More Free Advice:
·         Learn how to stay in touch once you've made a connection without being a pest. Persistence without annoyance –A fine line to walk – Lillah McCarthy, Sr. VP Turner Broadcasting System
·         Just get on with it! – Sarah Jackson, Personal Manager 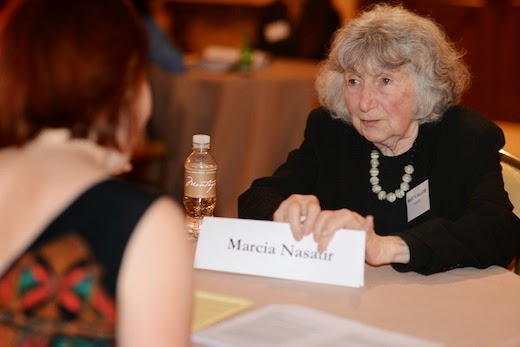 WIF mainstay Marcia Nasatir, taking millenials to school. (Carina Tautu)
·        You are going to have setbacks, so develop a philosophy of “Done. Next?…. ” – Marcia Nasatir, Producer
·        Recognize that your position in the business will change as much as the industry does so don't be afraid to reassess your goals and how to build the right team to reach them – Sharon Lawrence, Actor
·        Believe in yourself; never look back; always wear comfortable shoes – Marion Rosenberg, Producer/Personal Manager
·        Learn all there is to know about entertainment industry business and finance. Don't rely on others to be the brains of your operation – Gayle Nachlis, Executive Director, Women In Film
·        Know who your buyer is: study the market well before starting your project – Chevonne O'Shaughnessy, President, American Cinema International
·        Be passionate about your project: passion will get you through the hard times – Betsy Pollock, Associate Dean, AFI
·        Be bold. Don't be afraid to step out of your comfort zone – Stephanie Austin-Thaler, Producer
It's been a busy week for power women at the Montage, with Salma Hayek leading TheWrap's Power Women Breakfast a day earlier.
THE WRAP Media | By Mikey Glazer on October 31, 2014 @ 6:38 pm
Posted by Erik Martin Willen at 11/01/2014 10:49:00 AM