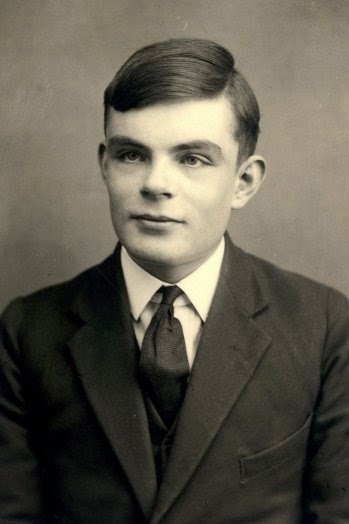 Getty Images
Sorry everyone, but A.I. is totally going to take over
Alan Turing was a war hero and computing pioneer. Now he's also the subject of a biopic starring Benedict Cumberbatch.

With The Imitation Game hitting theaters, it's time to go back to the source and see what the man himself had to say on topics including artificial intelligence and his unjust treatment for being gay.

1. Bad news: machines are totally going to take over.

“It seems probable that once the machine thinking method had started, it would not take long to outstrip our feeble powers," he said during a lecture in 1951. "They would be able to converse with each other to sharpen their wits. At some stage therefore, we should have to expect the machines to take control."

2. Turing feared his sexual orientation would be used to discredit his work.

In a 1952 letter to fellow mathematician Norman Routledge, Turing revealed his big concern about pleading guilty to a criminal charge related to him having had sex with a man — that it would be used to discredit his ideas.

“I'm afraid that the following syllogism may be used by some in the future," Turing wrote.

3. Turing believed a computer was intelligent if it could trick us.

"A computer would deserve to be called intelligent if it could deceive a human into believing that it was human," Turing wrote in 1950 defining his now-famous Turing Test. Earlier this year, a computer was said to have passed the Turing Test for the first time, though that claim was controversial and not all experts believe it happened according to Turing's rules.

4. Turing believed machines have the capacity for creativity.

"Machines take me by surprise with great frequency," he wrote in 1950, arguing against critics who said machines only have the capacity to do what we tell them to.

"I believe that at the end of the century the use of words and general educated opinion will have altered so much that one will be able to speak of machines thinking without expecting to be contradicted," he said in 1947. And he was pretty much right. C-3P0, anyone?

What Turing quotes are your favorites? Use that nice computer you probably wouldn't have if it weren't for Turing and let us know in the comments.